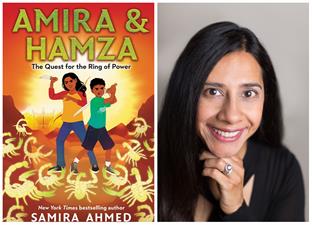 Meet the Author: Samira Ahmed with Special Guests at the Skokie Public Library

More About The Quest for the Ring of Power: Amira and Hamza are back in this epic sequel, which takes readers on a thrilling magical adventure as the siblings face their most terrifying and formidable opponent yet. They have returned from Qaf, the magical Jinn world, as triumphant heroes—and life has been pleasantly quiet. Too quiet. Hamza is determined to have one last monumental, epic adventure before summer ends. But when sneaking off to explore an old, abandoned castle goes from life-changing adventure to potentially deadly, Amira and Hamza find themselves in the middle of another dangerous quest to save the world. The siblings are brought face to face with the evil dev, Ahriman, the last in an ancient line of fire spirits, who is angry and out for revenge. Ahriman kidnaps Hamza and forces him to help locate the lost Ring of Power, an ancient and mysterious artifact that will allow him to rule the universe. Desperate to save her brother, Amira must outsmart perilous traps and confounding puzzles in a race against time to retrieve the artifact before Ahriman does, or say goodbye to Hamza and their world forever.

More About Samira Ahmed: She is the bestselling author of Love, Hate & Other Filters, Internment, Mad, Bad & Dangerous to Know, and Amira & Hamza: The War to Save the Worlds, as well as a Ms. Marvel comic book mini-series.  Her poetry, essays, and short stories have appeared in numerous publications and anthologies including the New York Times, Take the Mic, Color Outside the Lines, Vampires Never Get Old and A Universe of Wishes. She was born in Bombay, India, and grew up in Batavia, Illinois, in a house that smelled like fried onions, spices, and potpourri. A graduate of the University of Chicago, Samira has taught high school English in both the suburbs of Chicago and New York City, worked in education non-profits, and spent time on the road for political campaigns. She invites you to visit her online at samiraahmed.com.