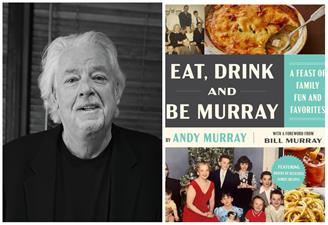 Eat, Drink, and Be Murray: Meet and Greet with Chef Andy Murray

Stop by Winnetka bookstore, The Book Stall (811 Elm Street) on Thursday, December 15 from 5:00 to 6:30 PM to meet celebrity chef Andy Murray! Chef Murray will be meeting with family, friends, and foodies and signing his new cookbook, Eat, Drink, and Be Murray: A Feast of Family Fun and Favorites! From the celebrated chef and owner of the Caddyshack restaurants, this family cookbook is full of beloved Murray favorites, with lots of stories, snapshots, and a foreword from celebrated actor, and Andy’s older brother, Bill Murray. This meet and greet event is not ticketed, but attendees must purchase their copy of Eat, Drink, and Be Murray from The Book Stall to enter the signing line.

More About the Book: In Eat, Drink and Be Murray, readers are invited to the Murray dinner table as Chef Murray shares a wide assortment of delicious family-favorite meals and cocktail recipes. Chef Murray's approach to cooking is bolstered by the belief that the best part of any meal is the time you spend laughing at the table. The Murrays spend a lot of time laughing, and food has always been their way of showing love, though a good cocktail doesn’t hurt. In Eat, Drink, and Be Murray, readers get to hear some of their incredible family stories, from learning about the food favorites of his siblings, cooking side by side with his mom, and behind the scenes looks at working in the kitchen of New York’s biggest culinary institutions, to never-before-told stories of Bill’s legendary pranks and the family’s love of golf. Full of gorgeous food photography, never-before-seen Murray family snapshots, a helpful list of kitchen must-haves, and hilarious family stories, this cookbook is like pulling a seat up at the Murray table: dig in!

Chef Andy Murray says, “My hope in reliving some of my favorite culinary experiences with you over the following pages is that not only will you learn to make some incredible dishes for friends and family, but you will also discover your own love of cooking. These stories, recipes, and tips became part of my DNA after spending a life in the kitchen.”

More About the Author: The seventh of nine Murray children, Chef Andy Murray worked his first job at the age of eleven when he was hired to be a busboy at the corner restaurant. He quickly graduated to dishwasher then short-order cook before leaving the Midwest for culinary training at the New York Restaurant School. Since then, he has worked in some of the biggest restaurants in the business and has spent more than 25 years as a chef in high-end restaurants, including Mortimer’s and Tribeca Grill. In June 2001, he opened the Murray Bros. Caddyshack Restaurant in St. Augustine Florida, and in April 2018, he opened the Caddyshack Restaurant in Chicago. Chef Murray has become known for his delicious and family-friendly meals with his popular Murray Bros. Caddyshack restaurants.